How To Beat Tech Sprawl, Part 2: Getting Visibility

This is Part 2 of a three-part blog series on Tech Sprawl and how you can beat it.

With well over 40,000 tooling options on StackShare for developers, tech sprawl is becoming a real hindrance to developer velocity. The number of options for software development tooling is immense and often leads to overcomplicated tech stacks.

Tech sprawl is the ultimate result of a lack of tech stack visibility, coordination, and standardization, coming from the need to ship things quickly. While today’s tools can be both powerful and helpful when used properly, overtooled software development life cycles are creating more risk and decreasing collaboration. The average modern web application has more than 2000 modules in it.

A big part of the issue is the limited amount of time that today’s developers have throughout the day. Their responsibilities cover many different areas, with an average of only 32% of their time actually spent writing or editing code. Because of this, when a new tool or tech stack is immediately needed, they are often forced to reactively find what they need at the moment, leading to an overabundance of tools inside the company’s portfolio. The answer to tech sprawl is Tech Stack Intelligence.

Tech stack visibility and transparency are important for organizational success, but attaining the right level of documentation and communication to put together a comprehensive list of tooling gets complicated. You’ll need to answer a few big questions:

Manually managing these details for every tool type and version within your organization is cumbersome.

The inherent complexity of vast tech stacks is a liability and creates a fragmented ecosystem of developer tooling where the only way to find out how to do something is to ask your colleague. Tech Stack Intelligence is designed to remove the manual burden of managing tech stacks through automation, ensuring that tooling data is accurate, complete, and up-to-date.

“StackShare has saved us hundreds of hours compiling, maintaining, and updating information on our stacks. We can now track it all in real time. StackShare’s transparency into our applications has been a big help in improving the overall knowledge flow across the company.” - Chris Cummings, Senior Director of Architecture, Tyler Technologies

With StackShare Enterprise all of your tech stacks, tools, packages, and team members are visible in a single dashboard with reports to drill down further. 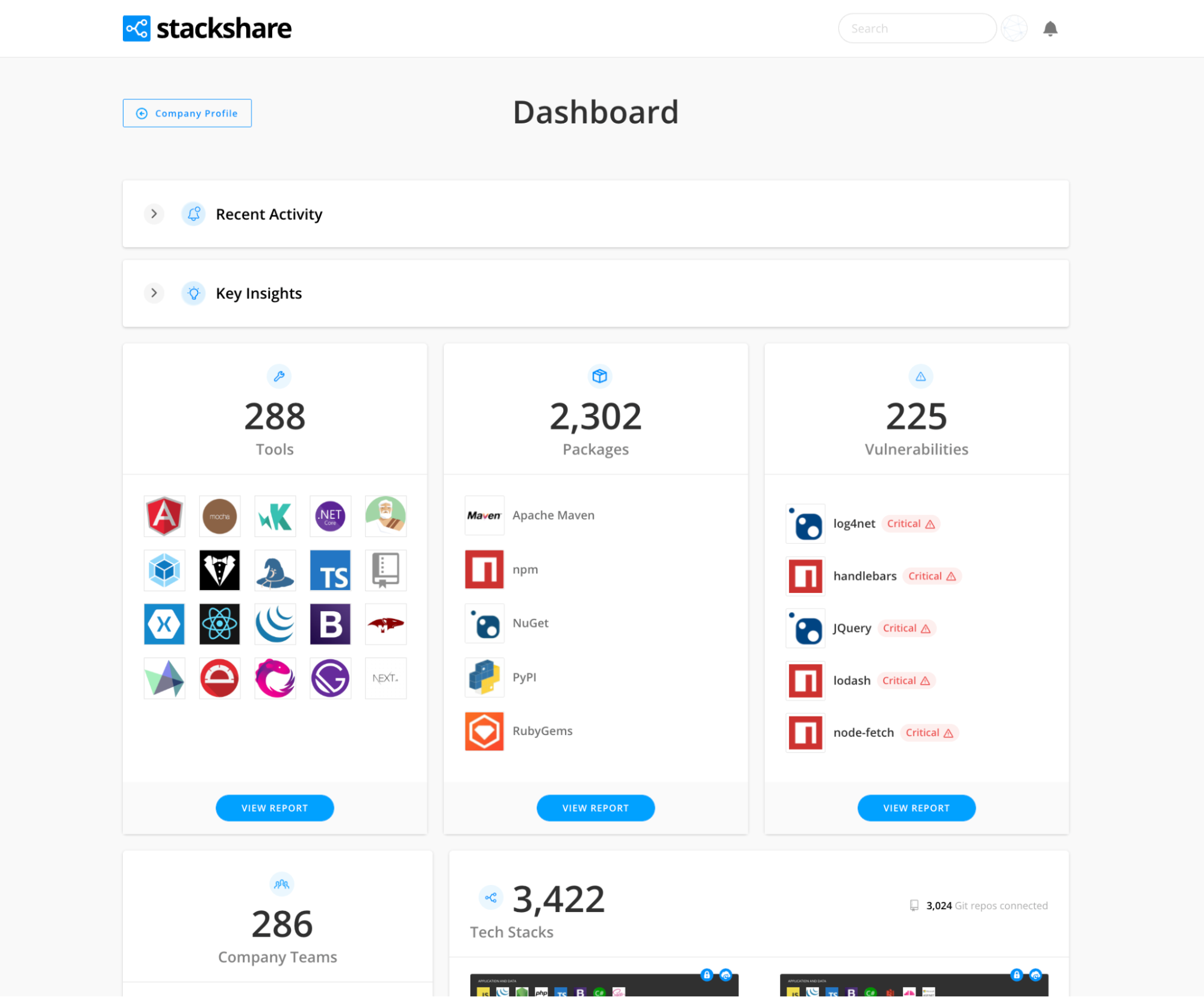 Anytime a team member merges in a Pull Request that contains a stack change in a connected repo, the private Stack Decision is automatically documented in your Feed and stack profiles.

This helps you eliminate the heavy maintenance burden associated with EA repositories with Tech Stack Intelligence.

There are often two methods that businesses use to make tech stack decisions. One is a “laissez-faire” approach, in which businesses allow their developers to boundlessly pick the tools they want to use, leading to a plethora of downloaded tools and monthly SaaS subscriptions, just hanging out across teams. Therein lies the issue of tech sprawl.

The other extreme is taking an authoritarian approach, and only allowing developers to use a small list of “approved” tools. This method can lead to developers feeling frustrated, as most developers prefer to have a say in which tools they use based on previous experiences and first-hand knowledge. Not only that, but this seriously constrains a developer’s creativity and ultimately impacts innovation since they’re forced to think “inside of a box” (and a small one at that).

As with many approaches, the sweet spot is somewhere in the middle:

“We now have visibility into the technologies in use across the company and we can proactively manage adoption and retirement. We can have oversight without having a heavy hand in making decisions for everyone.” - Jeff Green, CTO, Tyler Technologies

With Tech Stack Intelligence you can categorize any tool into an adoption stage that can be seen by all your developers and architects. You can even see reports and get alerts anytime a tool or technology has been approved or deprecated. Giving developers an easy way to see what they should and should not use goes a long way in reigning in tech sprawl, without forcing developers to use the approved tools. Many times developers use new tools because they simply don’t know what’s already in use and they have no easy way to find that information.

With Tech Stack Intelligence, developers get easy access to all the information they need about the tools being used internally. They can see what’s being used across all the codebases and repos that exist at the company. They also can see real-time alerts of tech stack changes being made across these repos, which leads to organic collaboration since developers can instantly see what their colleagues are using across teams.

“We have a lot of engineers in the StackShare Slack channel. The integration lets us see stack changes like minor and major version bumps being made across all of our repos in real-time, before any other tools surface them, which is awesome.” - Evan Robinson, VP of Engineering, AxleHire

Due to the proliferation of open source and SaaS products, packages, frameworks, and platforms are flying in and out of companies at an unprecedented rate- StackShare is now processing over 200 tech stack changes per day for the average company. As a result, tech stacks quickly grow in complexity, variation, and duplication across engineering teams, creating redundancy and insecurity. This ultimately slows down software development teams, and companies become slower to ship improvements and new products because they’re fighting off tech debt and performing high priority maintenance.

After automating your tech stack visibility, and opening up collaboration channels for data-driven tech stack decisions, Tech Stack Intelligence allows you to consolidate your tech stack, which leads to increased developer velocity.

Tech Stack Intelligence provides you with all the data that you need to find opportunities for consolidation across versions, technologies, products, applications, and organizations.

“We’ve saved hundreds of thousands of dollars so far by moving people to a standard set of technologies, with the potential to eventually save millions. We can then reinvest the savings back into products or other areas of the business.” - Jeff Green, CTO, Tyler Technologies

Consolidating your tech stacks and creating shared components and services enables your teams to move faster. In order to create these consolidated toolsets, you first need to know what’s out there and then have a reliable way of keeping that up to date- which is where Tech Stack Intelligence comes in.

Tech Stack Intelligence allows you to see all the versions of tools your organization is using within your dashboard, and share updates anytime versions change. Eliminate risk and costs from duplicate technologies with standardized tech stacks for different scenarios that everybody knows how to utilize.

If you’re interested in seeing if Tech Stack Intelligence is right for your organization, check out StackShare Enterprise for free today.

Stay tuned for Part 3 of our series on Tech Sprawl!