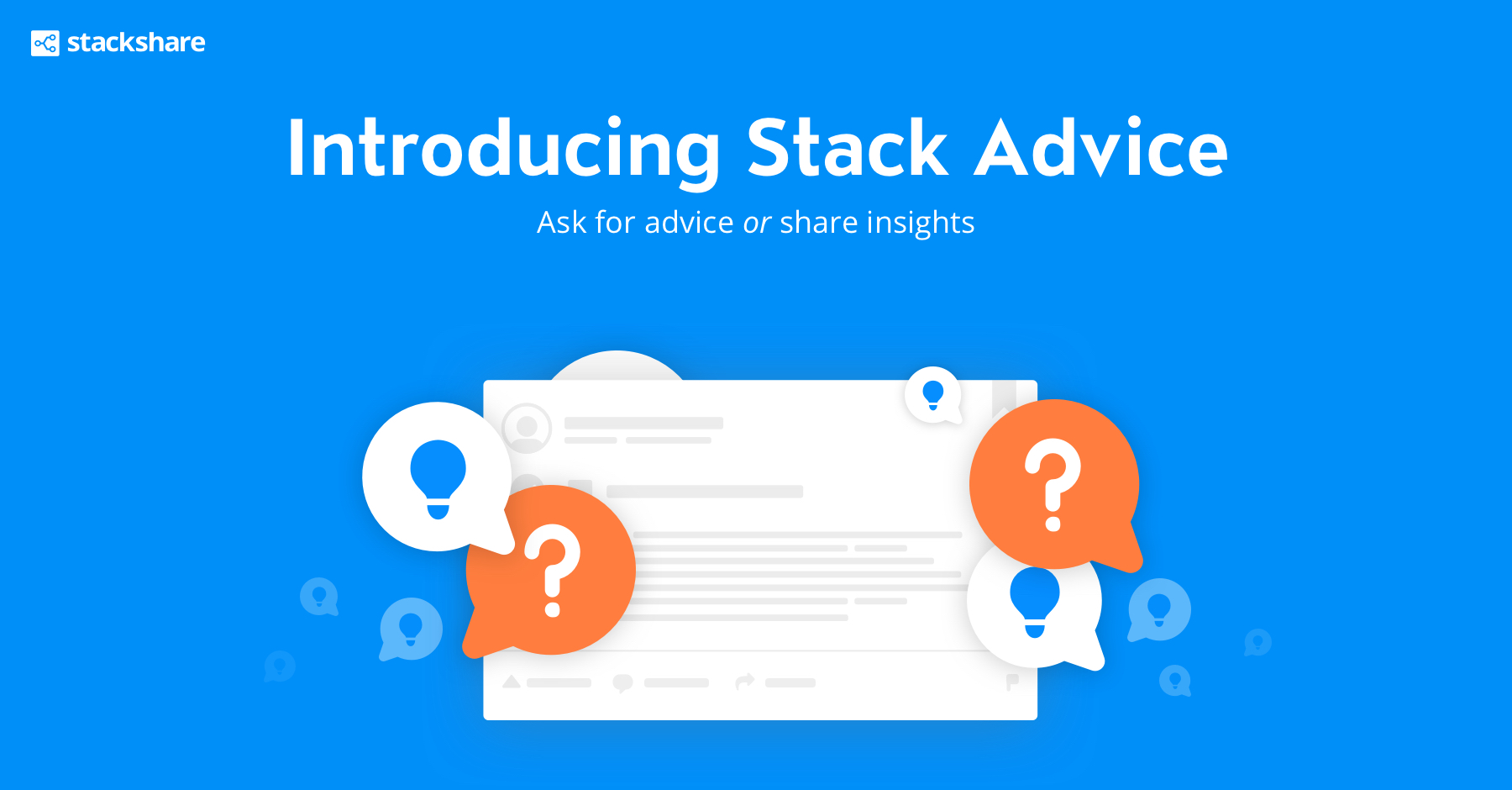 Imagine that you’re looking to build a realtime messaging service into your SaaS application (a Rails app), and you’re not sure whether or not you should use Kafka or RabbitMQ for queuing and retrying messages. What if instead of Googling around aimlessly, texting/calling/emailing people you know, or @channel’ing random channels on Slack, you could easily tap into a large network of developers and engineers that have experience with both Kafka and RabbitMQ? Well wake up, your dream has come true ✨

Today, we’re excited to announce Stack Advice - an easy way to get and give advice on specific tech stack decisions 👊🏾 Stack Advice is a new way for you to connect with a community of developers to get help making important technology decisions. 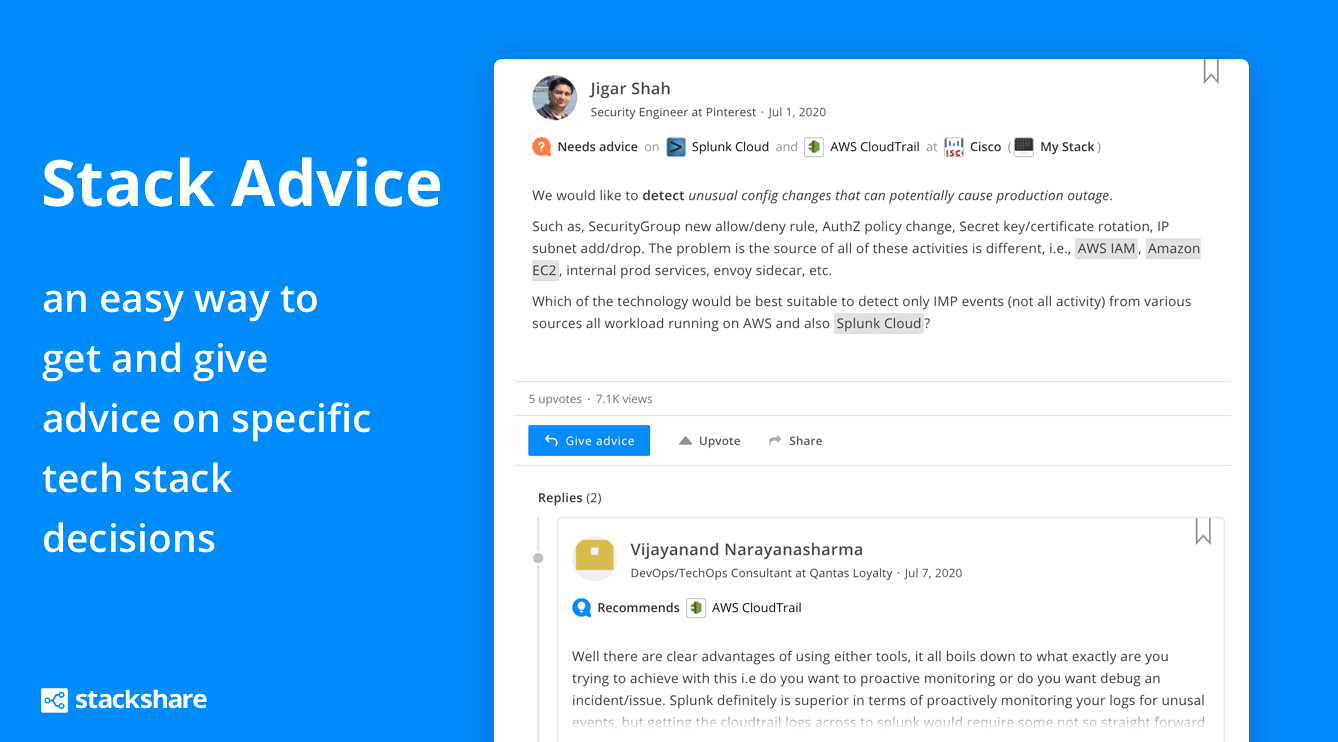 The reality is, more often than not, there is no right answer to “which one is better: React or Vue.js?” It almost always depends on a number of different factors- context matters. So while Stackups (comparisons) continue to be useful- there’s nothing like talking to other people who have experience with the tech stack you’re trying to decide on.

Our vision at StackShare has always been centered around allowing you to share your knowledge to help other developers make challenging and important technology decisions. We introduced Feed and Stack Decisions to help you share the major technology decisions you’ve made on your projects as well as let others interact with and learn from them. Since the launch in 2018, we’ve seen the community use Stack Decisions in all sorts of amazing ways, from the toughest call they made when architecting their last project, to a pro-tip they think every dev needs to know, to asking questions directly to the community. We didn’t explicitly support many of these use cases initially. Asking for advice is the one that came up over and over. Plus, Stackups are consistently the most popular pages, and developers visiting those pages said they wanted more help on which of the two or three tools being compared they should go with.

So over the past year we’ve been quietly testing sending out public advice requests to the StackShare community via email 🤫 The response has been amazing- there have been tons of awesome advice discussions from hundreds of developers. After getting a good amount of feedback, we built Stack Advice to help you easily get and give advice.

Stack Advice in the wild

While Stack Advice is going to be new to most people, a brave group of StackSharers have been using Stack Advice for months now. We estimate in aggregate, months of dev time have been saved through these discussions. Here are some of our favorite Stack Advice threads and discussions:

Thank you to the over 500 amazing StackSharers who have given advice to another developer using Stack Advice so far! You’ve helped shape the product and ultimately we could not have gotten to this release without you! 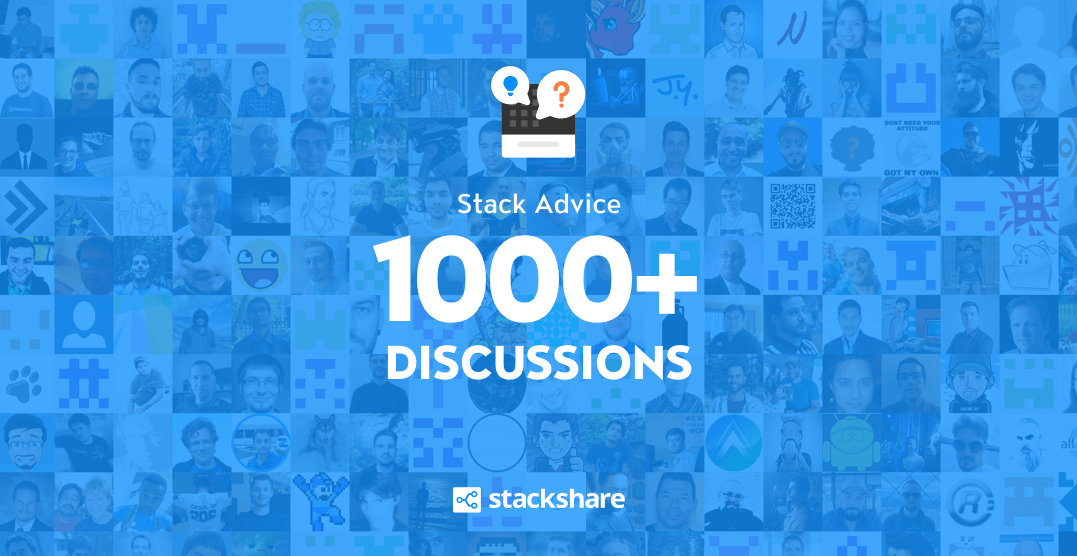 To get started with Stack Advice, simply open the composer, select “Get Advice”, select the tools you’re considering using, and describe the details of your situation. Once you share it, we’ll put it in front of devs with experience with those tools so they can give you their recommendation.

If you don’t happen to need advice right now, you can give advice and help another developer in need. By giving Stack Advice, you’ll build up a repository of technical knowledge on your own personal profile (as well as your company’s profile if you choose to) that you can reference and link to whenever you need it.

Stack Advice is also now available in Private StackShare for Teams, so you can privately ask developers across your company for advice on specific decisions.

We can’t wait to see the kinds of conversations that you and the rest of the StackShare community come up with!