This press release was originally published in BusinessWire and VentureBeat. 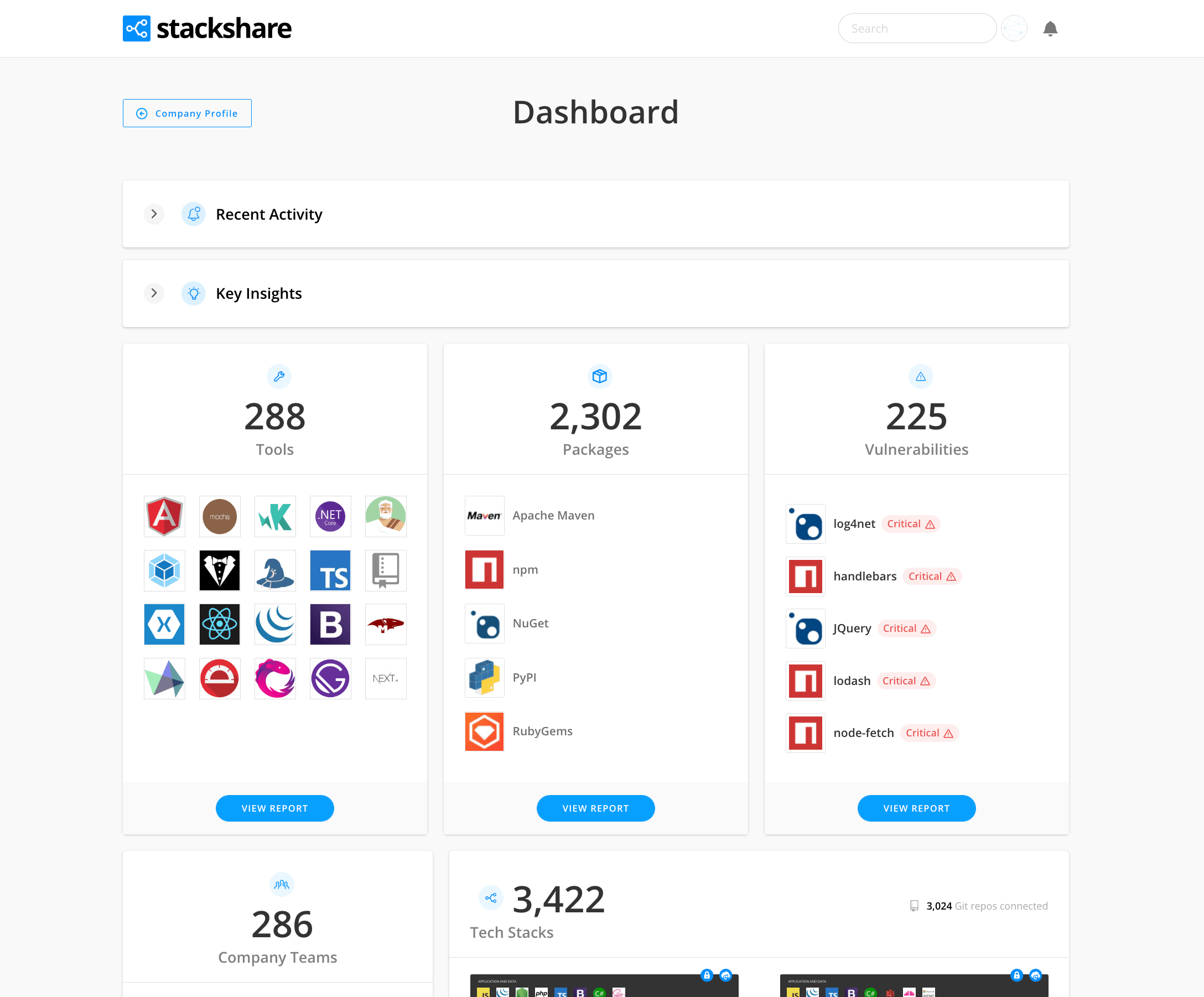 With over 40,000 open source and SaaS dev tools to choose from, large organizations quickly find themselves with unmanageable tech sprawl. Now with StackShare Enterprise, organizations can defeat tech sprawl with real-time automated tech stack visibility. With this visibility, customers can identify opportunities for and coordinate consolidation of versions, technologies, and products. This allows companies to eliminate risk and costs from duplicate technologies with standardized tech stacks for different scenarios that everybody knows how to utilize.

“By using StackShare we’ve saved hundreds of thousands of dollars so far by moving people to a standard set of technologies, with the potential to eventually save millions. We can then reinvest the savings back into products or other areas of the business,” said Jeff Green, CTO, Tyler Technologies.

By integrating with customers’ codebases, StackShare automatically maps out all of the tools, services, and libraries being used across engineering orgs, down to the version level, with the click of a button and keeps the data updated as tech stacks change.

“Integration was a breeze- we were up and running in a matter of minutes… we have a lot of engineers in the StackShare Slack channel. It lets us see stack changes like minor/major version bumps being made across all of our repos in real-time, before any other tools surface them, which is awesome.” said Evan Robinson, VP of Engineering, AxleHire.

With over 1,000 companies now using StackShare Enterprise, StackShare has analyzed over half a million code repositories and is now processing over 1.5 million webhooks per week for customers.

“StackShare has saved us hundreds of hours compiling, maintaining, and updating information on our stacks. We can now track it all in real time,” said Chris Cummings, Senior Director of Architecture, Tyler Technologies.

"We've talked to hundreds of technology leaders and everyone has said the same thing – they have no insight into their tech stacks," said Yonas Beshawred, Founder & CEO of StackShare. "StackShare Enterprise is the first to attack this problem head-on. We have tons of public tech stack data with our community of over 1M developers, and now's the time for us to solve the issue plaguing Fortune 500-scale companies today."

With a community of over one million developers, StackShare is helping companies like Tyler Technologies, AxleHire, LaunchDarkly, Xactly, Genetec, and Coherent Solutions create an automated system of record for effective technology visibility, consolidation, and governance.

StackShare is the tech stack intelligence company that empowers developers and organizations to beat tech sprawl by making data-driven technology decisions. StackShare provides real-time insights into all your tech stacks. With a community of more than one million developers, CTOs, and enterprise architects, StackShare brings both independent engineers and Fortune 500 teams together to save them time, increase engineering velocity, and lower their technology risk.