What Is Tech Debt? A Guide to Understanding Technical Debt & How To Address It

In today’s fast-paced development world, organizations need to ship code faster than ever to stay ahead of competition. However, speed can come at the expense of well-written, good-quality code. When teams rush to keep up with demanding timelines, details are bound to slip through the cracks, introducing unwanted or poorly-designed code. This issue, common to DevOps teams who are focused on speed and agility, is known as technical debt.

What is Technical Debt?

While many agree on the overall concept of technical debt, the industry currently lacks one clear definition.

According to an entry on TechTarget.com, the term “debt” describes this issue as similar to acquiring money through a loan- a quick solution that teams will have to pay off later down the road in time, money, and effort. Martin Fowler of Thoughtworks explains that technical debt leads to the build up of cruft- “deficiencies in internal quality that make it harder than it would ideally be to modify and extend the system further.”

If left unsolved, technical debt will seriously inhibit the success of a business’s software development lifecycle. Pluralsight puts it as “anything that creates friction between developers and delivering their work”. “Friction” may very well be an understatement, as technical debt puts developers in an exasperating position of backtracking to solve preventable problems introduced at the beginning of the SDLC.

As Technopedia explains, when development teams write “code that is easy to implement in the short run is used instead of applying the best overall solution”, they create extra work for the organization. And similarly to monetary loans with interest, cruft will only accumulate if left “unpaid”.

Here at StackShare, we help developers gain insights and make better, more informed and streamlined technology decisions. Through our community of more than one million developers, CTOs, and enterprise architects, we’re working together to find the best ways to minimize technical debt and ship code faster.

StackShare’s community collaboration brings visibility to tech stacks - an effective way to address technical debt. Through our platform Private StackShare for Teams, we partner with developers to minimize technical debt in a few different ways. We give you data to help you:

Many engineering teams at large companies use the same technologies across codebases, which is usually a good thing. However, having many different versions of the same technology, whether that be a library, framework, or even programming language, can be the source of a sizable amount of tech debt. Having different versions of languages for example, can mean having to implement the same features in completely different ways, so you end up with multiple implementations of the same solution with different code.

Using older versions of applications and tools will slow down a dev team tremendously, causing significant technical debt. If a development team uses multiple versions of the same tool or outdated tools and libraries, they won’t get the benefits of the latest software updates. This also translates into potential security risks, like “Log4Shell.”

The risks and impact associated with version variation applies to the entire stack- from front end frameworks, all the way down to databases and servers. With Private StackShare, you can see all the different versions of a particular technology you’re using, in one single view which then helps you to understand which stacks and repositories need to be updated and who devs need to do the updating: 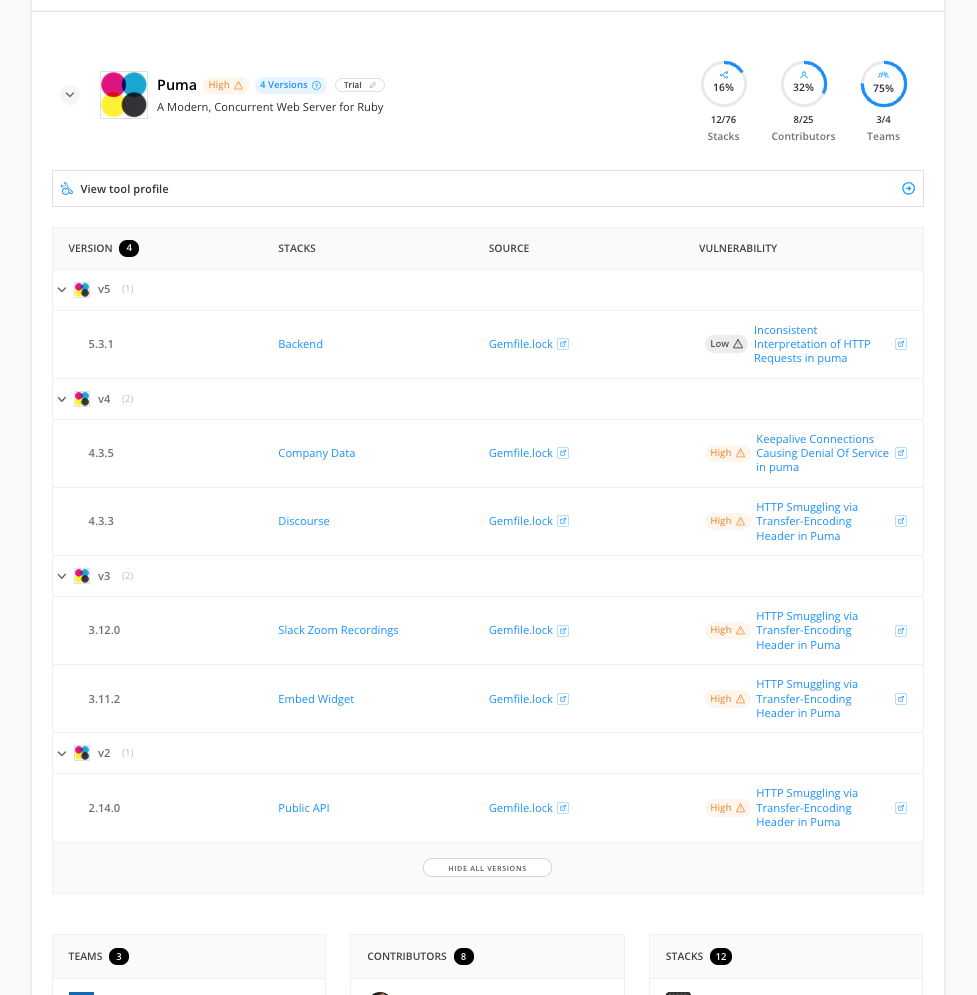 Tech debt can also appear in the form of having multiple technologies that do the same thing. One notorious example of this at large companies is usually having multiple front-end frameworks in use across many repos and applications. This ultimately can slow teams down because components can’t be re-used across repos and apps, teammates need to learn multiple ways of building components, and keeping versions up to date (which includes security patches) becomes far more complex and time consuming when it has to be done across multiple libraries and frameworks.

Private StackShare helps you get a handle on that by showing you which technologies you’re using for any given category of tools, including JavaScript UI Libraries (shown below). 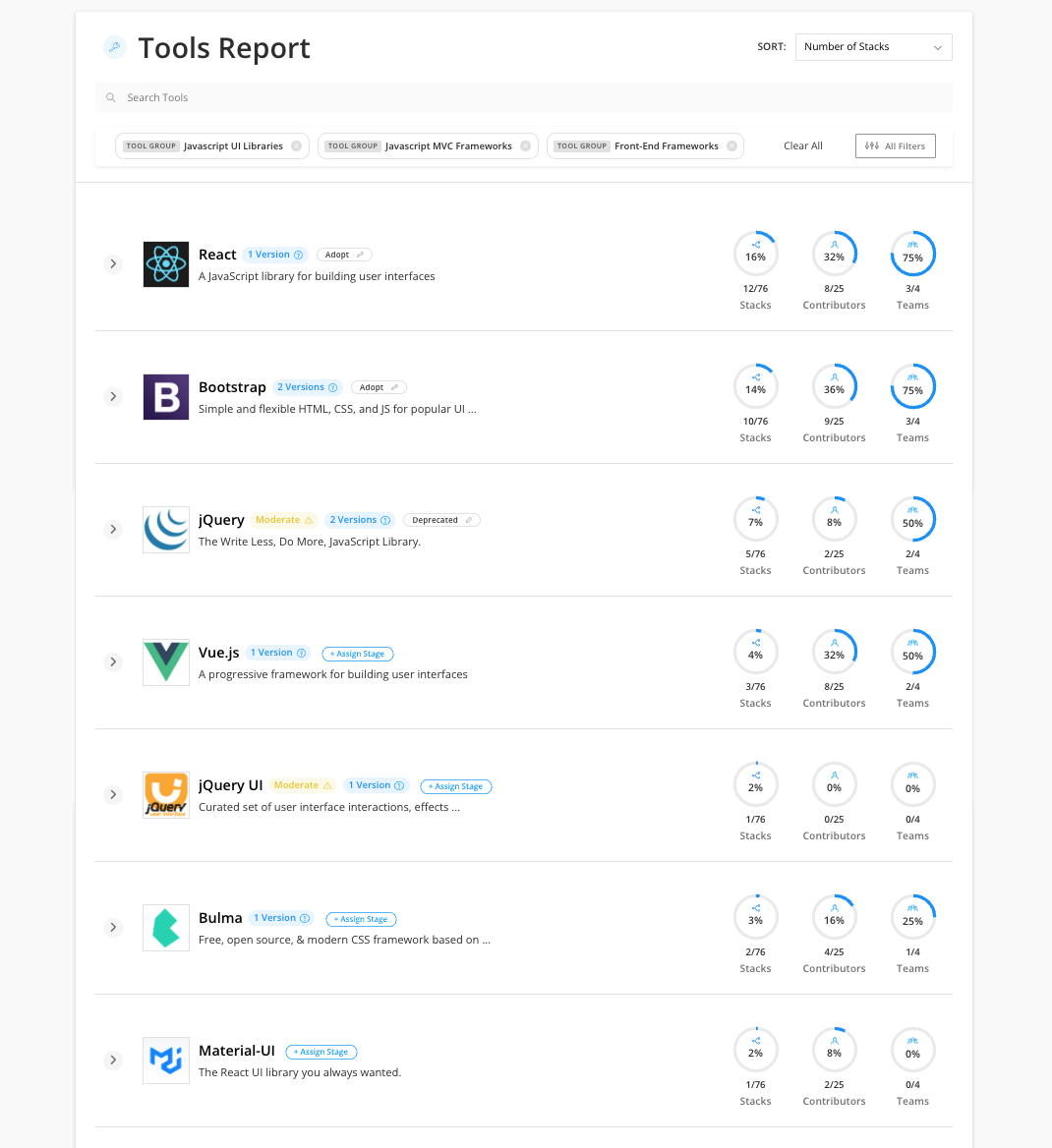 Once you’re aware of the duplication that exists, you can start to address it. For example, when new projects are spun up, a developer will know to at least choose one of the ones in use, and they can even see which ones are most commonly used inside the company since you can sort the report by number of stacks. This means they’re less likely to add more variation moving forward, but that they’ll also converge on the ones most commonly in use. In the scenarios where the most commonly used tools are not the most desirable, you can even mark that they should be “Deprecated” for example right inside the UI:

3. Get Alerts When Tech Stack Changes Are Made

Another way of addressing tech debt is to bring greater transparency to tech stack changes being made across teams, repos, and applications. By alerting teams when others are making changes, you increase collaboration on things like version updates. For example, if one team is implementing an upgrade for Rails, it’s helpful for other teams to know that so that they know that handling any breaking changes is a solved problem that they can simply go to that team for. In this example, you’d see the Rails upgrade happening in Slack and you’d be able to have a conversation about it (this is a real example of a version update we did for StackShare itself a few months ago):

Knowing when teammates add or remove packages is another way to address tech debt. By knowing when these things happen, you can communicate where there may be duplication or when a change isn’t necessary and should be reverted.

Using Private StackShare, you can get immediate, daily, or weekly updates on how your tech stacks are changing: (along with Slack alerts). Here’s what a sample email update looks like: 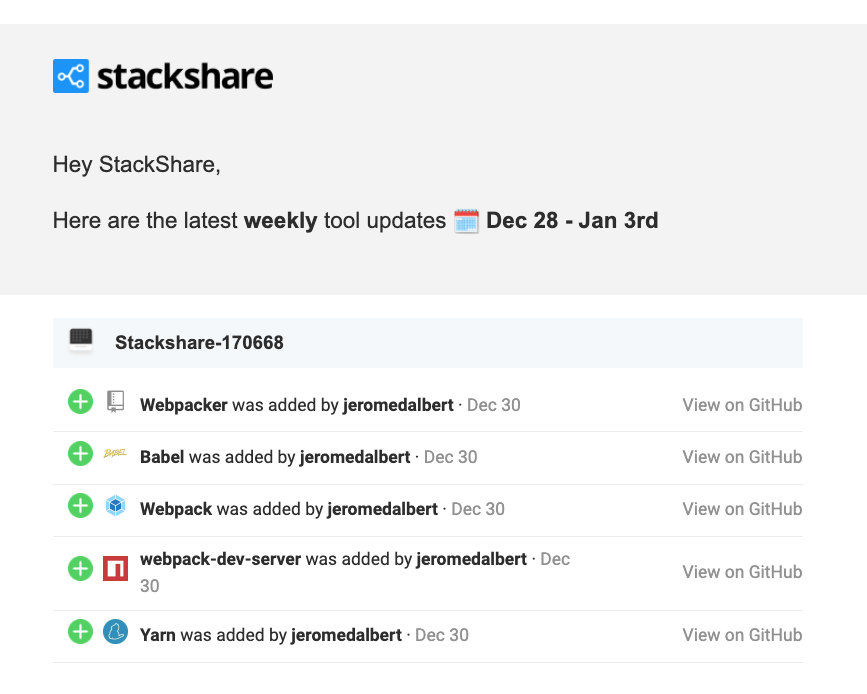 Solving technical debt is a challenge in itself. Scouring repositories for potential sources of technical debt is a time-consuming, pain-staking task. With an endless number of people, processes, and technologies to take into consideration, it’s often overwhelming for teams to get ahead of tech debt.

Even if one area of the team learns how to reduce their technical debt, it can be difficult to pass this knowledge across the organization amidst the pressure and deadlines of a fast-paced tech development lifecycle.

Eliminate tech debt and start sharing the technical wealth across your organization with Private StackShare for Teams.