Amazon Web Services - Lambda and Google Cloud Functions are Serverless platforms; services set to execute scripts responding to specified events, such as a HTTP request or a database update. Serverless, or “Function-as-a-Service”, can be considered an evolution of Microservices, whereby applications are broken down to their smallest executable parts but without the always on server requirement of traditional Microservices. Since there are no servers to manage, Serverless deployments scale infinitely without hassle and without costly unused resources. Serverless is also inherently fault tolerant, as when a single execution fails, it has no impact on future or concurrent executions.

Serverless can be considered a glue which binds the services of its provider, enhancing their capabilities and enabling advanced flexibility and usefulness. However, through the use of an underlying runtime, Serverless scripts can also invoke functionality typical of Microservices, such as image manipulation, video transcoding and other data intensive tasks.

While Microservices may typically degrade in performance with increasing numbers of requests, the reverse is often true of Serverless. The reason for this is that Serverless providers will only maintain scripts in a ready state if they are used frequently (hot start). If their use is infrequent, then they may take longer to spin-up prior to execution (cold start).

The delay in executing Serverless scripts can be problematic for some applications. As such, factoring start-up times into your application architecture is a must when using Serverless and the provider you choose may be important.

Cold start times are dependent on the scripting language used, the size of the function to execute, the number of executions already in progress and the period of time elapsed since the last execution. Both platforms typically experience an average delay of around a quarter of a second for warm starts, while cold starts may be as much as ten seconds or more. However, the pattern in which cold starts affect functions does differ between platforms, whereby AWS Lambda appears to have a larger delay at smaller load, while Google Cloud functions initially run more quickly, but tapering at higher load. 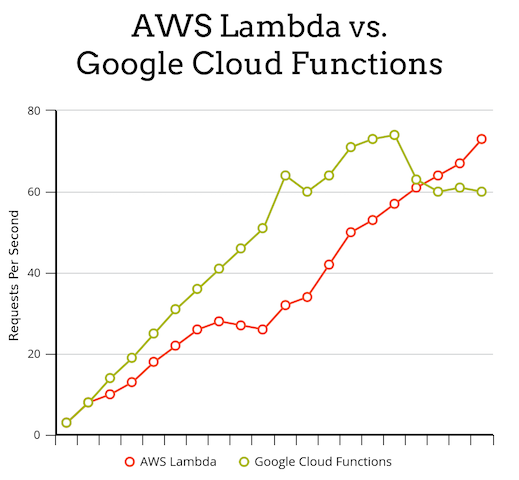 The size of your project may also be a factor. AWS Lambda supports unlimited functions per project and will allow 1000 executions per account for each region. Google Cloud Functions, on the other hand, provide a cap of 1000 functions per project, with a maximum of 400 executions. However, with regard to execution time, AWS Lambda will timeout after five minutes, while Google Cloud Functions may execute for up to nine minutes, which may be more important for long running processes, such as video composition and transcoding. 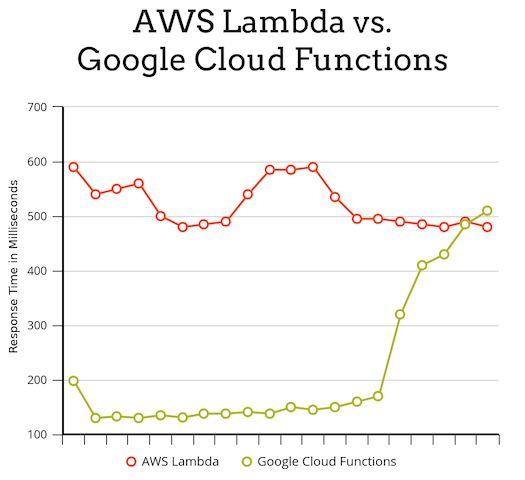 Testing your Serverless scripts remotely can be both frustrating and time consuming. Deploying your scripts after making changes takes time and your scripts are not immediately available when uploaded, with both AWS Lambda and Google Cloud Functions taking around two minutes to fully deploy. Thankfully, both platforms provide command-line tools to assist in developing and testing your applications, locally.

AWS provides the SAM CLI; a development tool that makes it easier to create, develop, test and analyze Lambda functions. SAM is an abbreviation of Serverless Application Model. Ironically built in Google Go, the SAM CLI uses SAM templates to identify the content producers and consumers of your functions elsewhere in the AWS eco-system. SAM CLI supports each of the scripting languages supported by Lambda and runs on Windows, Mac OSX and Linux operating systems.

SAM CLI assumes no knowledge of your tests or testing framework, leaving you free to choose your own. It works by leveraging CloudFormation within a local Docker container and simulating the AWS environment on your own machine.

With the SAM CLI, you generate events that might occur in a live AWS environment.

This produces a file you can customise and include in your testing environment to trigger your function.

With gcloud, you can deploy your functions simply;

and invoke them with sample values;

For local development, Google provides the Cloud Functions Node.js Emulator which, like SAM CLI, establishes a local setup that mimics the deployment environment. The emulator provides commands similar to gcloud, so you only need to learn a single API.

As Google Cloud Functions are much simpler than AWS Lambda, events are provided simply as a passed flag. The options for such events include:

To trace the event source and downstream calls from a function, AWS provides X-Ray. AWS X-Ray generates a Service Map of events and call details, along with function idle and execution times which expose the efficiency of your Lambda services within the greater application stack.

These values are then provided as detailed visual graphs in the Google Cloud dashboard.

As with AWS, Google provides an additional service called Stackdriver. With this service, developers can search detailed logs created from the executing functions and even create alerts from a simple console.error invocation within the function itself.

AWS Lambda vs Google Cloud Functions: What are the differences?

Developers describe AWS Lambda as "Automatically run code in response to modifications to objects in Amazon S3 buckets, messages in Kinesis streams, or updates in DynamoDB". AWS Lambda is a compute service that runs your code in response to events and automatically manages the underlying compute resources for you. You can use AWS Lambda to extend other AWS services with custom logic, or create your own back-end services that operate at AWS scale, performance, and security. On the other hand, Google Cloud Functions is detailed as "A serverless environment to build and connect cloud services". Construct applications from bite-sized business logic billed to the nearest 100 milliseconds, only while your code is running.

"No infrastructure" is the primary reason why developers consider AWS Lambda over the competitors, whereas "Serverless Applications" was stated as the key factor in picking Google Cloud Functions.

According to the StackShare community, AWS Lambda has a broader approval, being mentioned in 1002 company stacks & 585 developers stacks; compared to Google Cloud Functions, which is listed in 53 company stacks and 21 developer stacks.

Need advice on what platform, systems and tools to use.

Evaluating whether to start a new digital business for which we will need to build a website that handles all traffic. Website only right now. May add smartphone apps later. No desktop app will ever be added. Website to serve various countries and languages. B2B and B2C type customers. Need to handle heavy traffic, be low cost, and scale well.

We are open to either build it on AWS or on Microsoft Azure.

Apologies if I'm leaving out some info. My first post. :) Thanks in advance!

I recommend this : -Spring reactive for back end : the fact it's reactive (async) it consumes half of the resources that a sync platform needs (so less CPU -> less money). -Angular : Web Front end ; it's gives you the possibility to use PWA which is a cheap replacement for a mobile app (but more less popular). -Docker images. -Kubernetes to orchestrate all the containers. -I Use Jenkins / blueocean, ansible for my CI/CD (with Github of course) -AWS of course : u can run a K8S cluster there, make it multi AZ (availability zones) to be highly available, use a load balancer and an auto scaler and ur good to go. -You can store data by taking any managed DB or u can deploy ur own (cheap but risky).

You pay less money, but u need some technical 2 - 3 guys to make that done.

Netlfiy Functions uses AWS Lambda under the hood, but Netlify adds some nice sugar. The biggest advantage is the local development experience with netlify-cli. This allows you to run your functions locally with local configuration or pull configs from the Netlify dashboard. I built a health-check endpoint in about 2 minutes, and my send-email function in less than an hour.

See more
Get Advice from developers at your company using Private StackShare. Sign up for Private StackShare.
Learn More
What are some alternatives to AWS Lambda and Google Cloud Functions?
Serverless
Build applications comprised of microservices that run in response to events, auto-scale for you, and only charge you when they run. This lowers the total cost of maintaining your apps, enabling you to build more logic, faster. The Framework uses new event-driven compute services, like AWS Lambda, Google CloudFunctions, and more.
Azure Functions
Azure Functions is an event driven, compute-on-demand experience that extends the existing Azure application platform with capabilities to implement code triggered by events occurring in virtually any Azure or 3rd party service as well as on-premises systems.
AWS Elastic Beanstalk
Once you upload your application, Elastic Beanstalk automatically handles the deployment details of capacity provisioning, load balancing, auto-scaling, and application health monitoring.
AWS Step Functions
AWS Step Functions makes it easy to coordinate the components of distributed applications and microservices using visual workflows. Building applications from individual components that each perform a discrete function lets you scale and change applications quickly.
Google App Engine
Google has a reputation for highly reliable, high performance infrastructure. With App Engine you can take advantage of the 10 years of knowledge Google has in running massively scalable, performance driven systems. App Engine applications are easy to build, easy to maintain, and easy to scale as your traffic and data storage needs grow.
See all alternatives
See all the technologies you’re using across your company.
Sign up for Private StackShareLearn More