As of right now the answer seems to be no. They've provided no sort of migration path over, and Slack, the company seems to have very little interest in being an on-premises group chat company right now.

If you find yourself in this situation - whether you are a former HipChat Server user, or just started evaluating tools before this whole thing happened, we've rounded up the most popular on-premises HipChat alternatives for you: 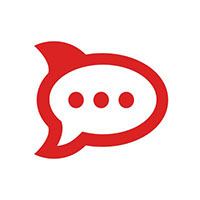 Rocket.Chat is an open source team chat platform built in Meteor. The project currently has over 19,000 stars on GitHub and has over 400 contributors. It was launched in 2015 by a group of Brazilian developers and today has a team of 36 working on the project full time.

The core features are what you would expect from a group chat platform. Rocket.Chat supports public and private channels, direct messages, and mentions. They also include some of the "fun" features that make Slack such a pleasure to use. With RocketChat, you can add reactions to messages, embed GIFs, add custom emojis, and more. You also get some less fun, but incredibly useful things like full-text search, message history, and Markdown support.

With live chat, you could potentially replace the existing chat widget on your website (or add that functionality) and have customer support chat messages come in directly to your team chat client. According to the documentation, this is a fairly new feature, and the functionality seems to be limited for now. So, you might not want to get rid of Intercom just yet.

If you're an internationally distributed team, like the makers of Rocket.Chat, the real-time translation feature might be appealing to you. It uses machine learning to automatically translate messages in over 50 different languages!

You can see a full list of current Rocket.Chat features here. 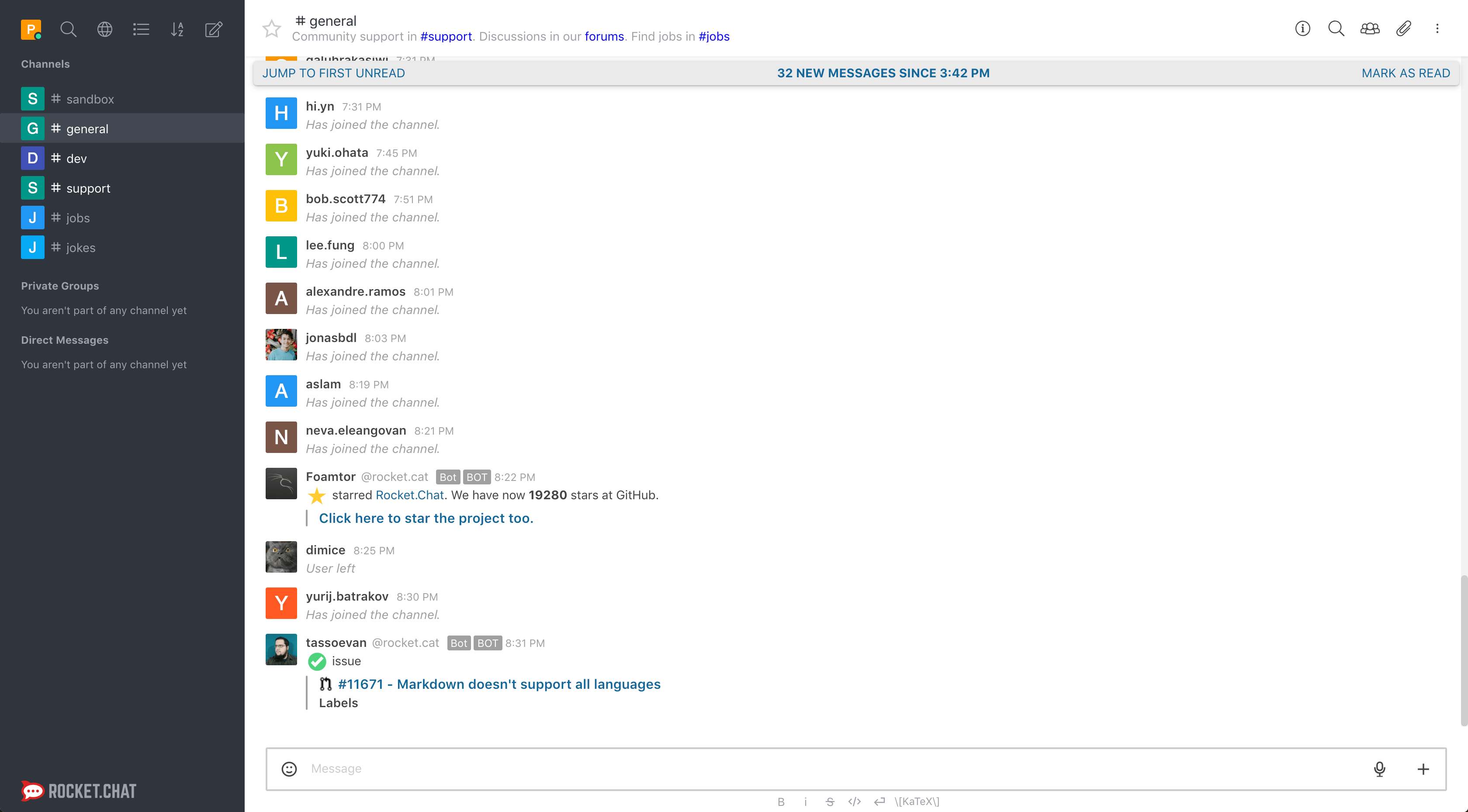 Rocket.Chat displays a long list of integrations on their site:

It's worth noting, though, that many of these are community-built and may not be actively maintained or up to date. However, they are launching an app marketplace for developers to find, share, or even sell apps they've developed for the Rocket.Chat platform in "mid-2018".

The good news is that you can write many integrations yourself fairly easily. With the Scripts feature, you can receive webhooks in Rocket.Chat and process them however you want. You can also do the reverse and scripts to execute when a particular phrase is typed in the chat.

You can self-host Rocket.Chat just about anywhere. The docs have guides for hosting on Heroku, EC2, Digital Ocean, and many more.

They also of course have a managed cloud offering that starts at $50/mo for 50 concurrent users.

Once your Rocket.Chat server is set up, you can access your chat with desktop clients on Windows, Mac, and Linux, or use the iOS and Android mobile apps.

Of course, the best way to evaluate a new piece of software is by actually using it. Fortunately, the Rocket.Chat community uses Rocket.Chat to chat! Check out the community chat here.

Rocket.Chat uses GitHub issues for project management, which provides a great way for us to see what's being worked on and what's in the pipeline. Take a look at this board to see what's on the roadmap. 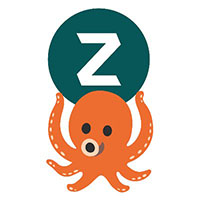 Zulip calls itself "the world's most productive group chat". The project was started in 2012, acquired by Dropbox in 2014, and eventually open sourced in 2015. Since then, they've racked up almost 8000 stars on GitHub and over 400 contributors.

The key feature that makes Zulip stand out is the threaded messaging model. Like the other chat tools, you can create channels based around general groups or interests (project launch, front end devs, etc.). However, every message sent in a channel also must have a topic attached to it. Conversations within a channel are then grouped into topics treated as a first-class citizen (as opposed to threads in Slack) with easy navigation. This feature seems to especially useful for internationally distributed teams, as it makes asynchronous conversations actually possible. 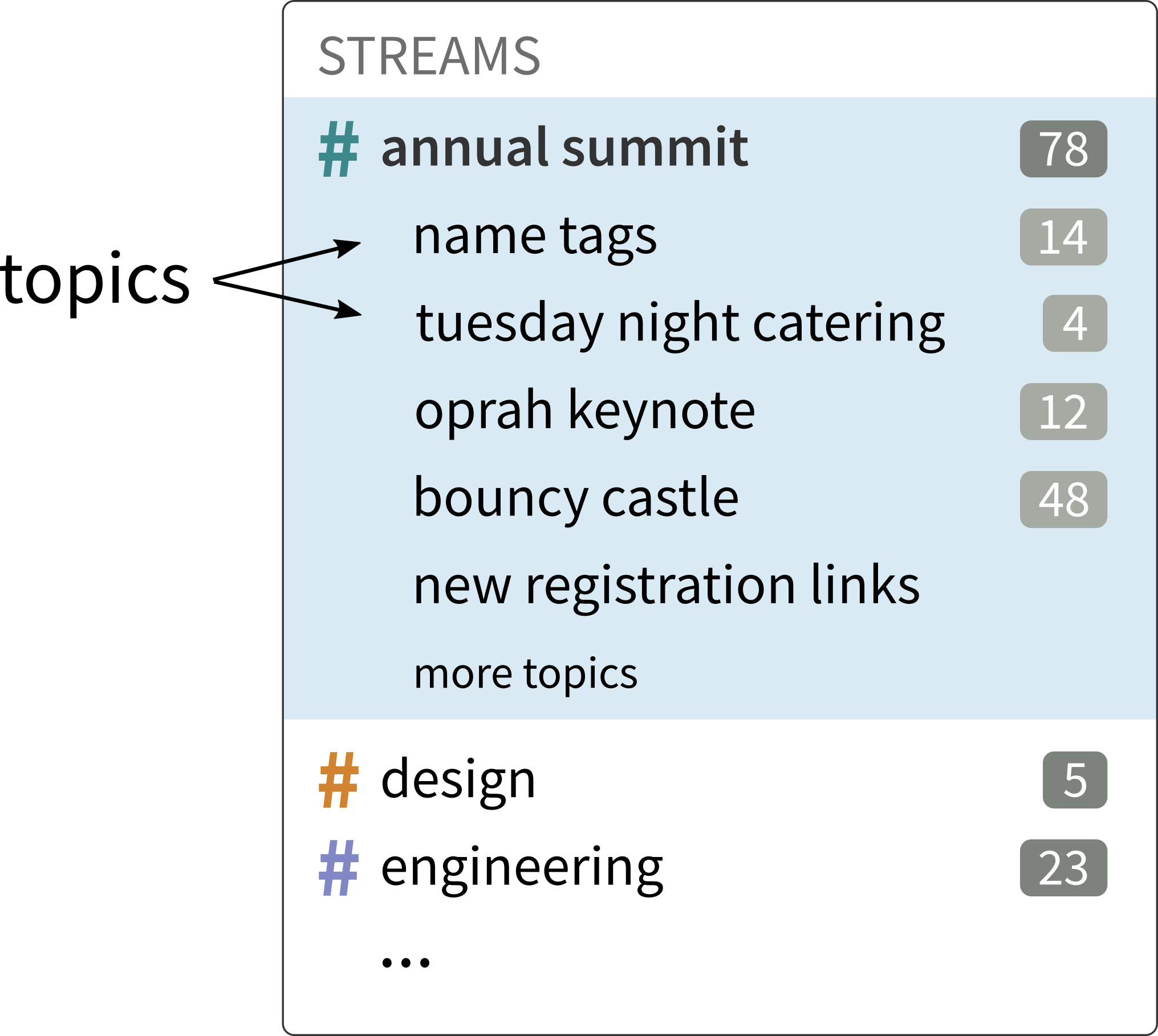 Beyond threaded messaging, Zulip also offers all of the fun chat stuff: emoji reactions, inline image, video, and Tweet previews, code blocks with syntax highlighting, Markdown and LaTeX support. Finding an old message is easy with full-text history search, and if you're not ready to send a long message just yet, you can save it as a draft. 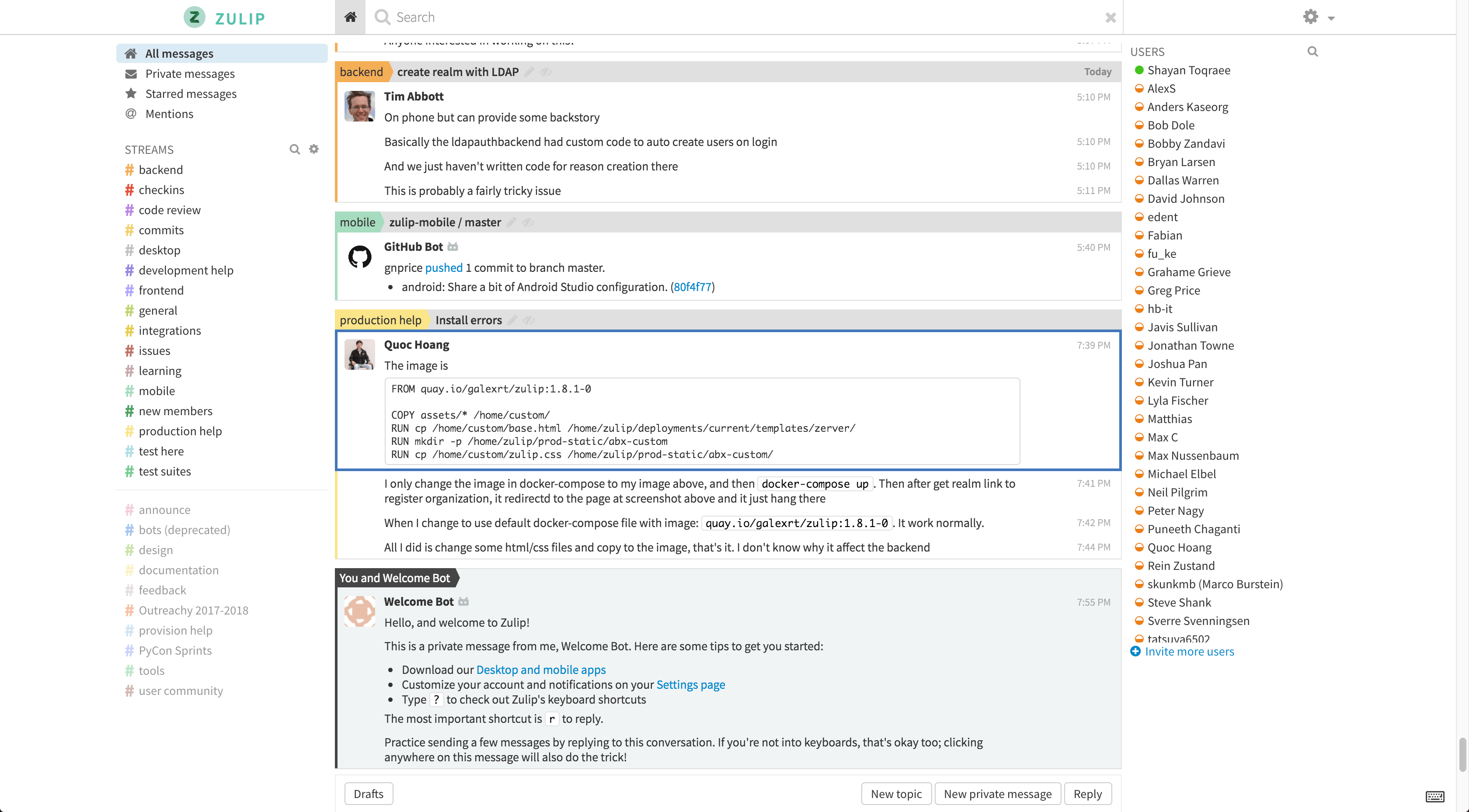 Zulip offers by far the most integrations out of any of these apps. Currently, they have 90 native integrations like Basecamp, Asana, GitHub, CircleCI, Dropbox and more.

And if the app you need to integrate with isn't on that list, don't worry hundreds more are available via Hubot or Zapier.

If you plan on self-hosting Zulip, you're going to need a dedicated Debian or Ubuntu LTS server.

Just like Rocket.Chat, the main way the Zulip community stays in touch is through their chat software. It's a great way to try it yourself!

In their docs' Roadmap page, Zulip says they plan to focus on "the mobile experience", a "visual polish of the main webapp", "building out our API, bots and integrations framework", and "onboarding" for "the next few months".

Their GitHub setup isn't quite as fancy as Rocket.Chat's, but you can bet issues marked high priority are coming up next ;) 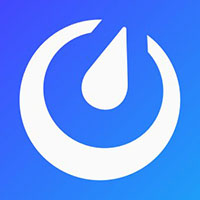 Number 3 on our list and number two most popular (based on number of stars) on GitHub. MatterMost stacks up with almost 3000 stars and over 240 contributors.

There are essentially two different versions of Mattermost - each with different features. The team edition is open source and ready to be hosted on a private cloud. You get your file-sharing, direct messages, and threads. Yes, you even get your custom emojis. Mattermost Team Edition also has slash commands, webhooks, and a plugin framework!

The Enterprise Edition of course comes with a lot more security features. Out of the box, you get multi-factor auth, advanced access controls, and more. You can also deploy the app as a simple binary + MySQL, which is apparently great for data centers! 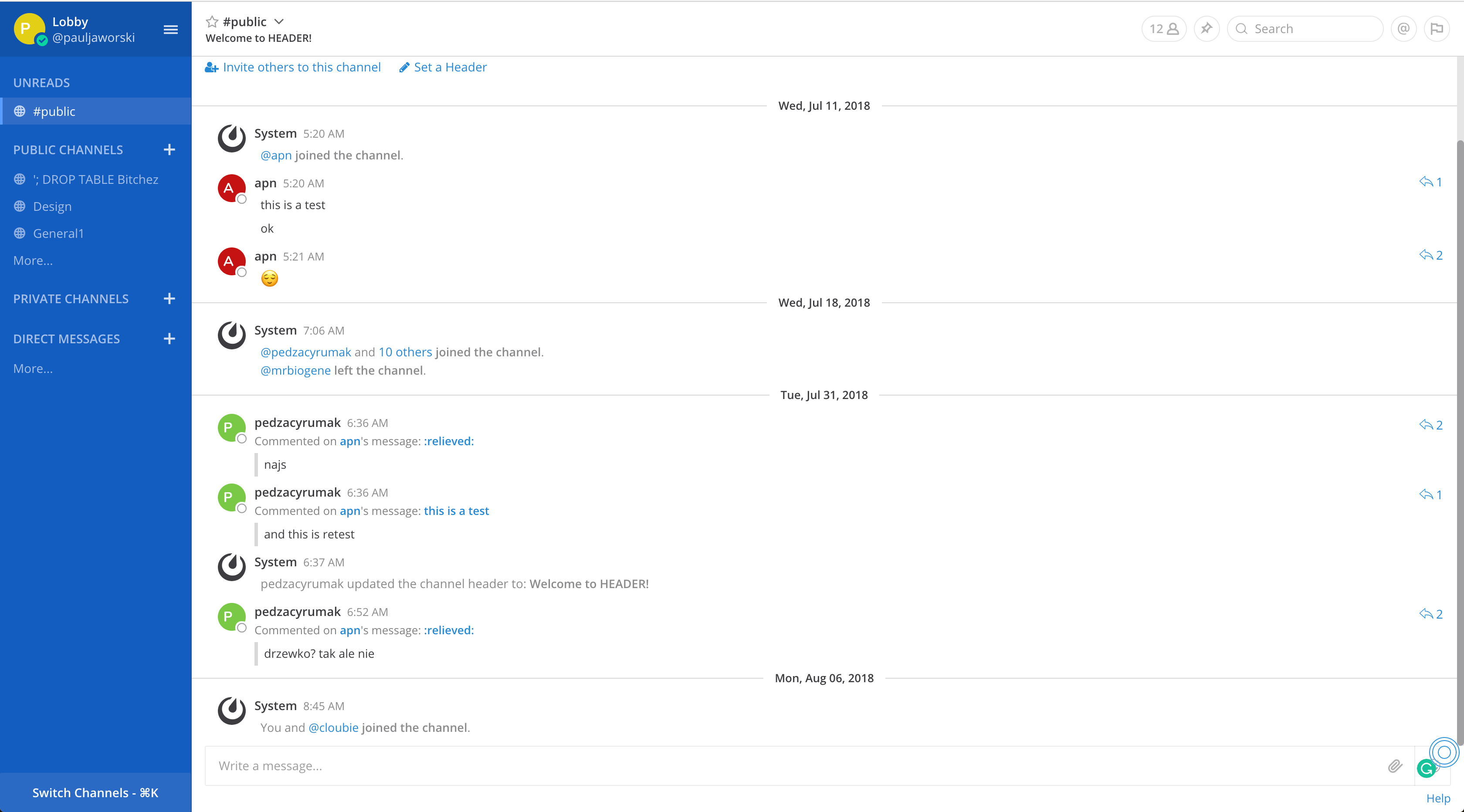 They also have plenty of community-built, open source integrations here.

Mattermost can be hosted on just about any flavor of Linux. The official docs provide directions for deploying on Docker, Bitnami, Elastic Beanstalk, and more.

Mattermost is available on Mac, Windows, Linux, Android, and iOS.

It doesn't seem like Mattermost has a community chat like their competitors do. I did find demo.mattermost.com, which seems to be a latest working demo version of their team edition chat softare.

You can of course check out the GitHub Issues, but they won't give you too much insight other than that they are migrating to Redux. 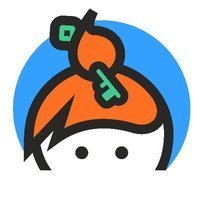 Keybase Teams is another open source Slack alternative, brought to you by the good folks over at Keybase. We didn't include Keybase Teams in our main roundup because it's fairly new (just launched last September), although it's been picking up a lot of steam on GitHub. If you're a Keybase fan or mostly concerned with security and encryption for your messaging, check them out. 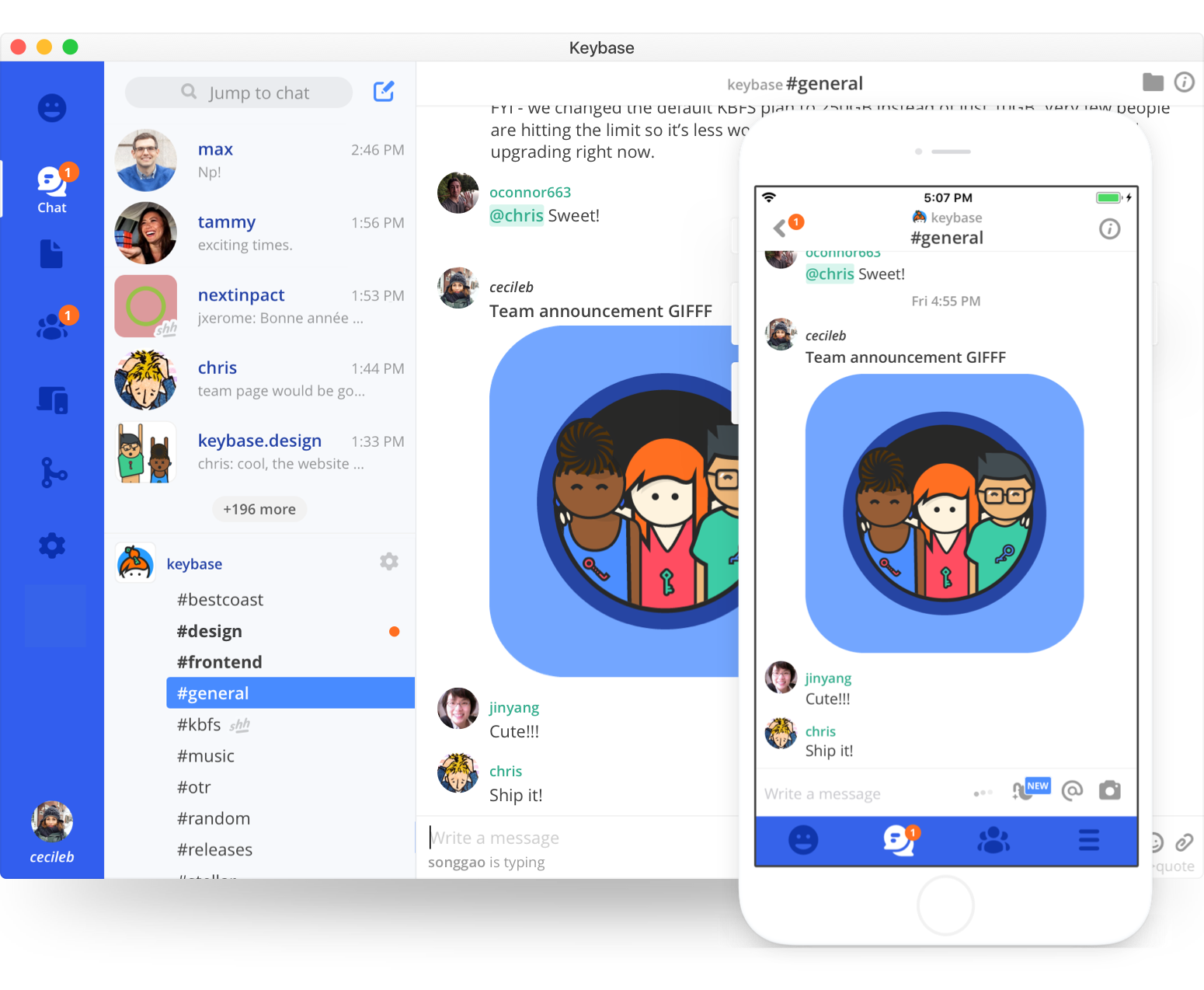 Which one is for me?

After spending a lot of time reading through the documentation and playing around with these 3 HipChat replacements, it became clear that they each certainly have their own use case.

If what you want is basically a self-hosted version of Slack, then Rocket.Chat is your winner. It's got all of the features we've come to expect from a group chat platform in 2018 including integrations with GitHub and Jira, custom emojis, inline images, GIFs, and more.

They're also launching their own app marketplace very soon. Hopefully, this should leverage the large, active community that has already grown around the product into building some pretty awesome apps.

Rocket.Chat also looks to be doubling down on bots, with a whole page on their (footer) menu dedicated to them. So, if you still think chatbots haven't quite had their day yet, this is one to look at.

If you think the way that most team chat apps currently do chat is fundamentally broken, then hopefully you agree with Zulip's solution.

With Zulip, every message you send must be tied to a conversation topic. The goal here is to avoid people in different time zones getting left out of chats, and for it to feel more natural in general to communicate asynchronously with your teammates by being able to easily jump back into conversations without scrolling through 200 unrelated messages in that channel.

After spending some time in the Zulip community chat myself, I also find that a lot less tends to get said with this style of chat. You have to think just a bit more before you post a message and so there are less off-hand remarks, random thoughts, comments, etc. I could see this, along with the fact that GIFs don't expand as large, driving a pretty decent productivity gain. It's certainly not as "fun" to use as Slack, but that might be a good thing? 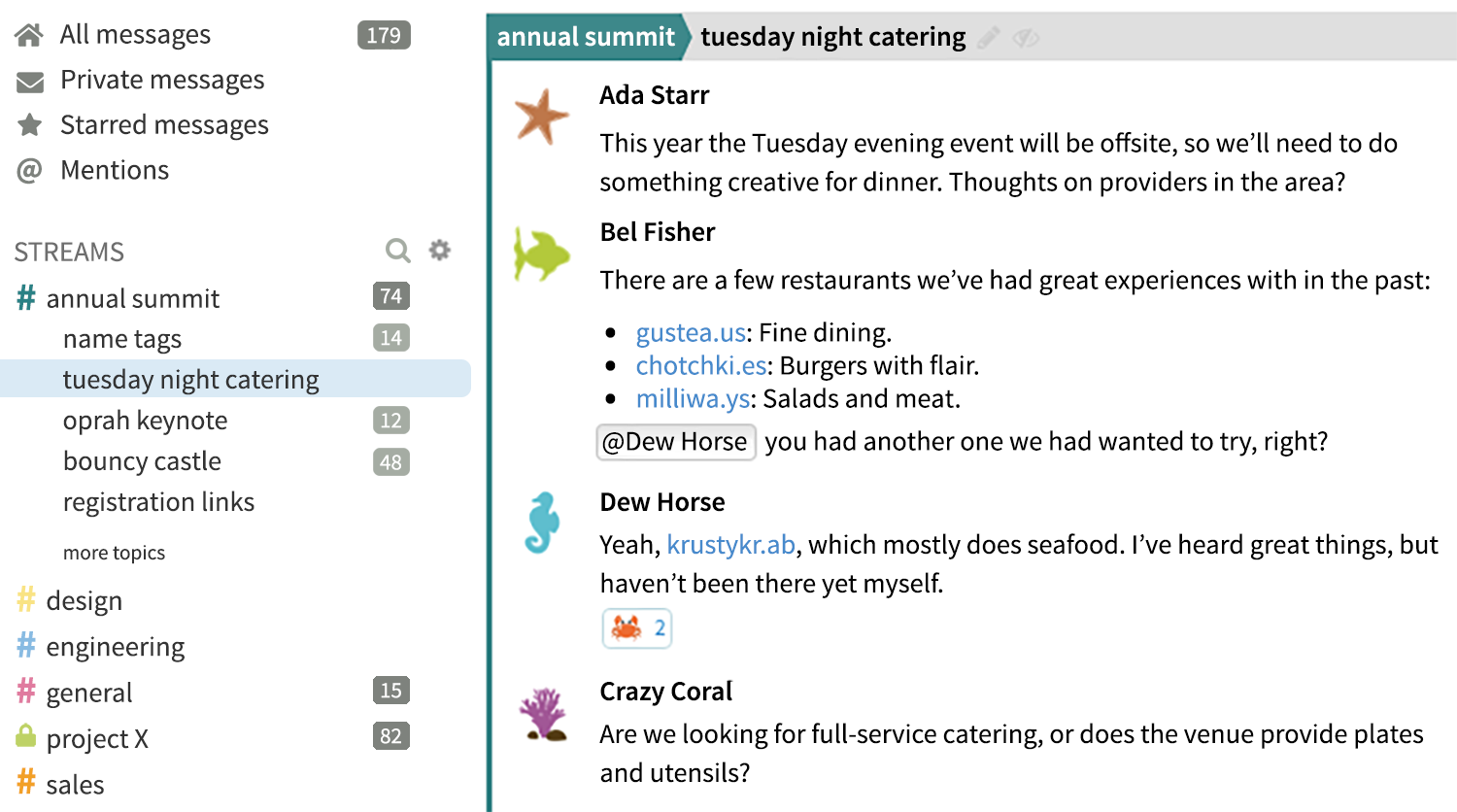 Beyond that, you're going to find many of the same features and even more integrations for Zulip than you would on Rocket.Chat. How appealing you find the concept of topic-based threading for all your team communications will likely be the deciding factor here.

If you're an enterprise team with enterprise needs, Mattermost will probably matter most to you (ba-dum chhh!). It's used already by companies like Samsung, Virgin, and the Department of Defense, which tells you just about everything you need to know. This is not the sexy pick of the three. It's the one that's going to make your security people happy and your compliance people happy.