The Next Generation of Software Stacks

Editor's note: To celebrate the announcement of the StackShare API (Beta) we've invited the data experts at Mode to dive in and show what sorts of insights can be gleaned from stack data. This post was written by Benn Stancil, Chief Analyst at Mode. Mode is a data platform that gives you SQL, charts, dashboards, and analysis, all in one centralized place.

The world of software is an ecosystem, and Slack, GitHub, and Amazon EC2 are right at the center of it. 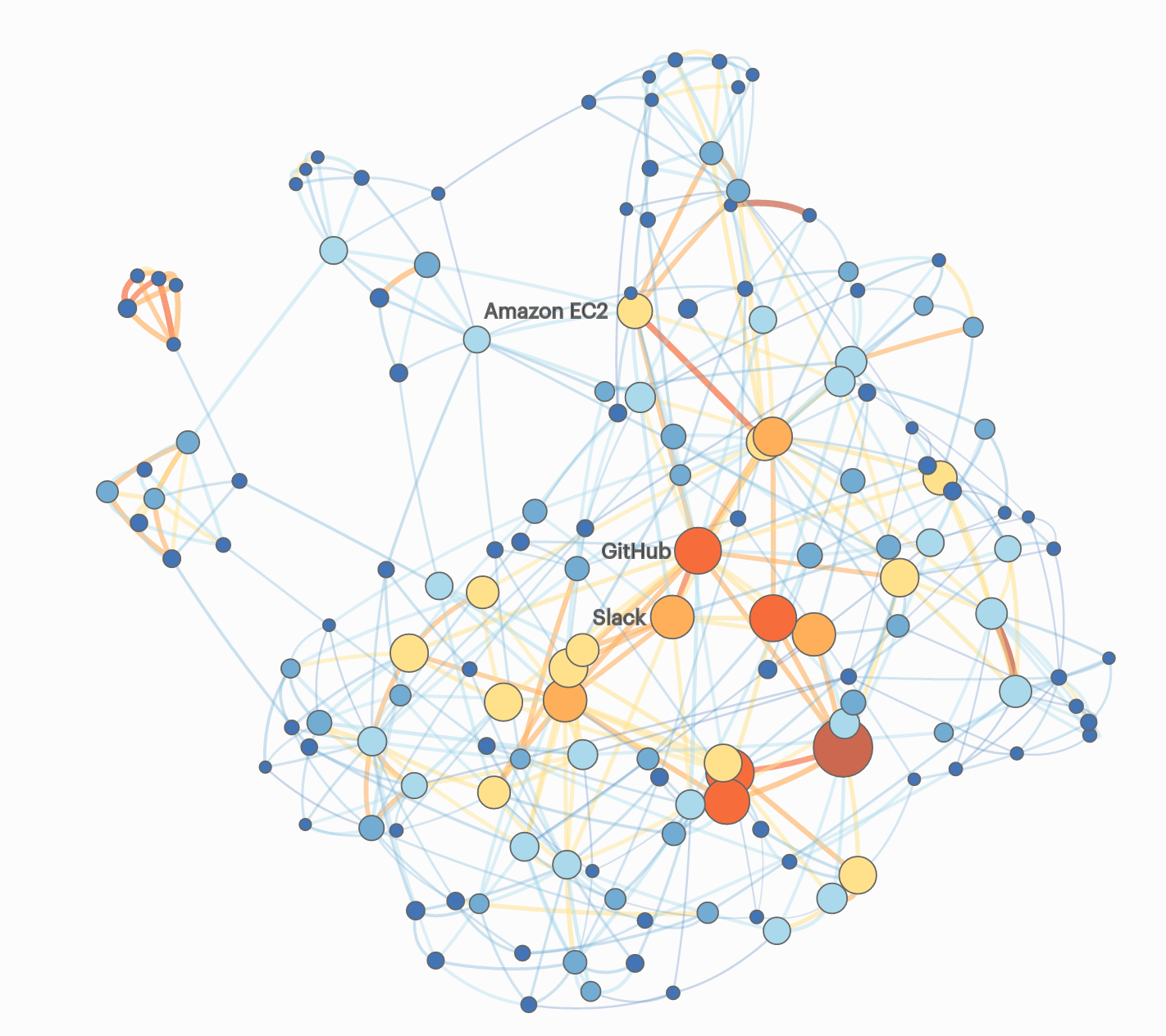 These tools represent a new era of software, where the ability to integrate with other tools is paramount. In addition to being powerful services on their own, Slack, GitHub, and EC2 flourish in a network like the one above. They're designed to be expanded, customized, integrated with, and built on top of—and huge communities have formed around them as a result. Visit TechCrunch or Product Hunt on any given day and you're likely to see a new Slackbot, a new library on GitHub, or a new app or service built on EC2.

But if Slack, GitHub, and EC2 are becoming the hubs of the modern tech stack, what will be the spokes? What other tools might thrive in this new ecosystem?

We can start to answer this question by looking at what's currently used in tandem with these three services. Companies that use GitHub, EC2, or Slack (companies we'll call GECS) are early adopters of the interconnected tech stack. By finding out more about GECS and the other tools they use, we might be able to get a glimpse of where technology stacks are headed.

Today, StackShare has announced the introduction of the StackShare API to help answer these questions. Now anyone can access data on technology stacks from thousands of companies around the world, including leading startups like Airbnb, Lyft, and Dropbox. With this data in hand, I set off to figure out:

What types of companies are GECS and where are they located?

GECS tend to be SaaS, mobile, and cloud computing companies. This isn't surprising—Slack and GitHub are SaaS companies themselves, and EC2 is a cloud computing service. In many ways, the companies that tend not to be GECS are more interesting. Financial services, e-commerce, digital media and advertising—categories further along the tech company hype cycle—are less likely to be GECS.

The graphic below, whose structure is used throughout the rest of the post, shows how much Slack, GitHub, and EC2 are over- or under-represented among different categories of companies. The higher the percentage in each cell, the more likely that tool (the name on the top) is to exist in the corresponding category listed on the side. 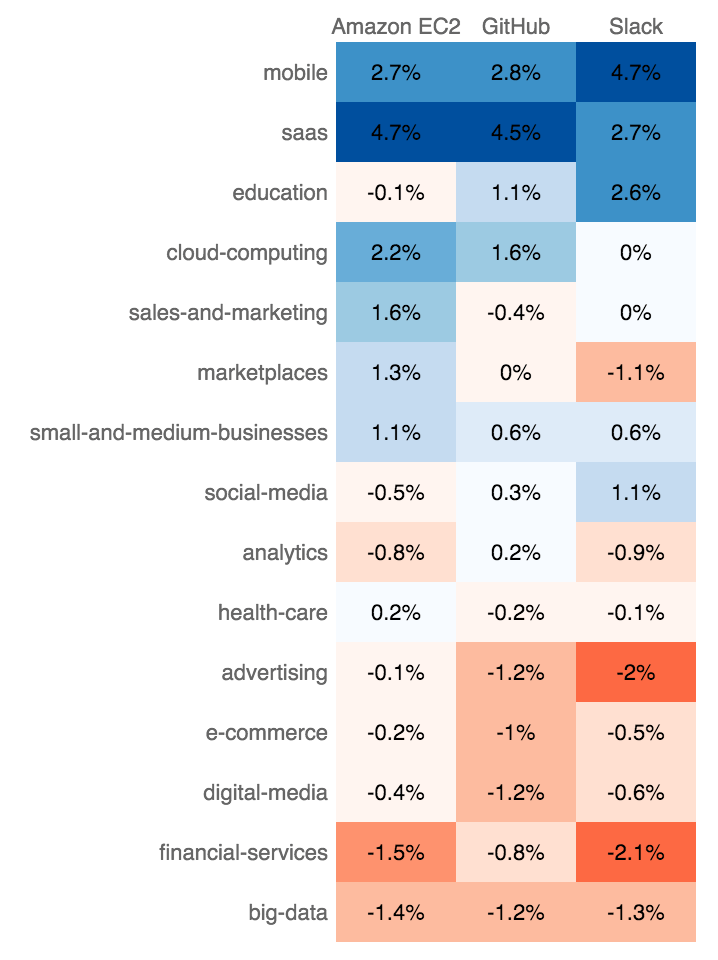 Perhaps unsurprisingly, GECS are more likely to reside in tech hubs, and particularly in Silicon Valley. By combining StackShare's data on company locations with Google's Geocoding API, I calculated how over- or under-represented GECS are in Silicon Valley, Boston, New York, Seattle, and LA. Silicon Valley's clear domination may be in part because Slack and GitHub are built in San Francisco, but this can't explain the entire trend: Silicon Valley is most over-represented among customers of EC2, the only service of the three headquartered outside of San Francisco. 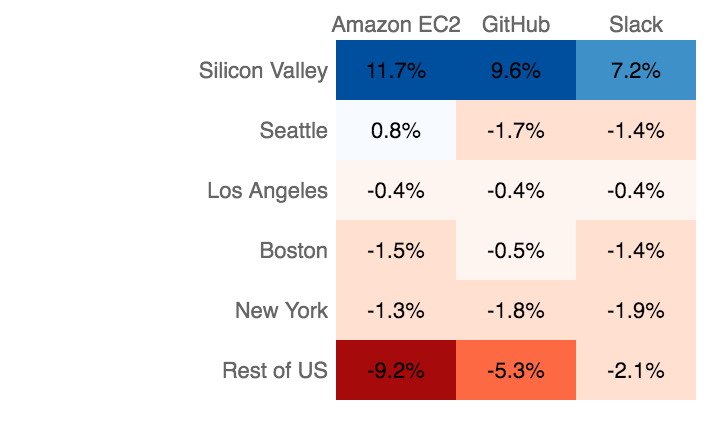 What types of technology do GECS use?

This matches nicely with the SaaS trends above. Since SaaS products are often complex web apps, it makes sense that SaaS companies would rely on these technologies more than content, media, or e-commerce companies. Perhaps reflecting this same trend, frameworks and libraries like Bootstrap and jQuery UI—tools that can be common “starter” tools in front-end web development—are unpopular among GECS.

Finally, nothing stands out more than the rejection of PHP. Facebook, it looks like you're going it alone. 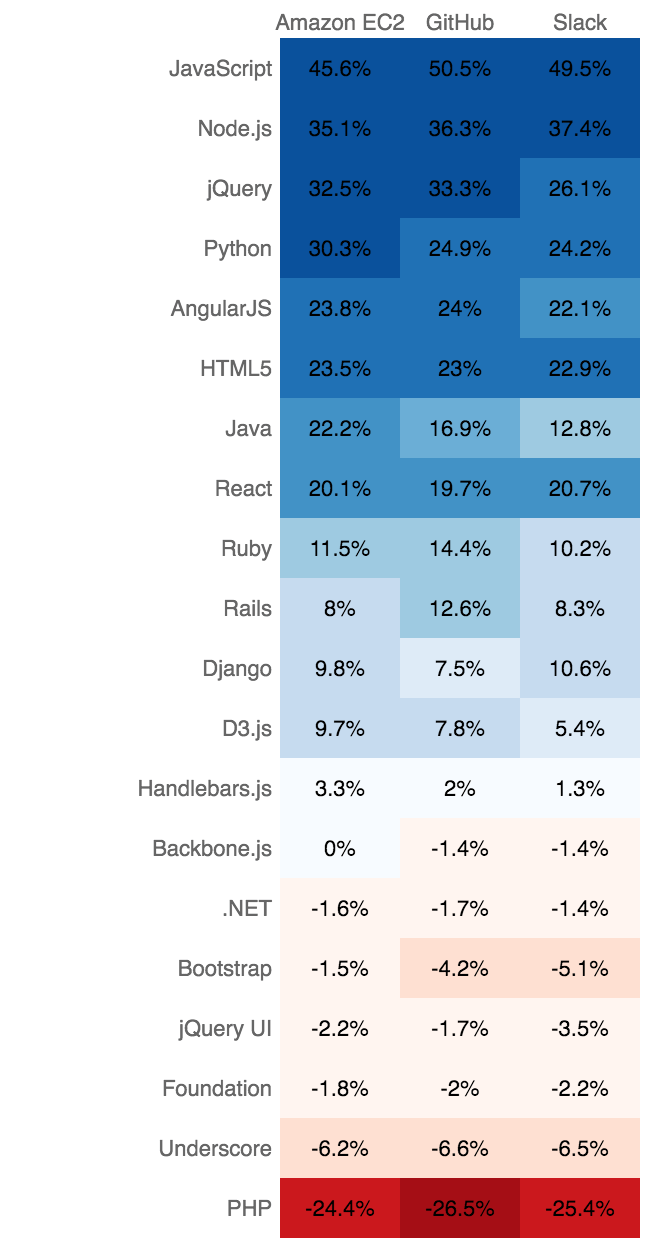 For hosting, GECS of course lean on Amazon and Heroku (which is itself built on top of AWS), at the expense of Microsoft. Neither of these trends are particularly surprising. Many GECS are already using EC2; using other AWS services makes sense. The move away from Microsoft is also apparent elsewhere—.NET is one of the most unpopular languages among GECS. 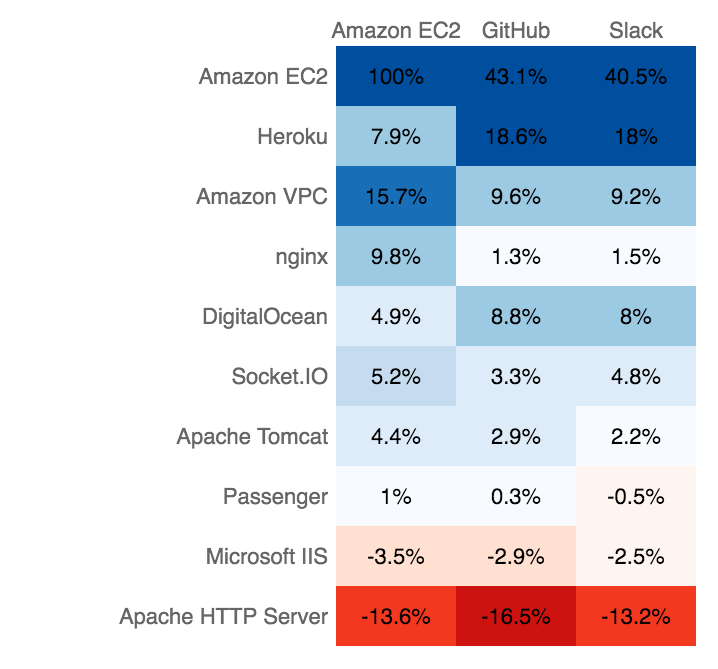 What other tools do GECS use?

GECS have a clear bias towards certain types of applications and services as well. These preferences are particularly apparent in the analytics stack. Tools typically aimed primarily at marketing teams—tools like Crazy Egg, Optimizely, and Google Analytics, the most popular tool on Stackshare—are extremely unpopular among GECS. These services are being replaced by tools that are aimed a serving both marketing and analytics teams. Segment, Mixpanel, Heap, and Amplitude, which provide flexible access to raw data, are well-represented among GECS, suggesting that these companies are looking to understand user behavior beyond clicks and page views. 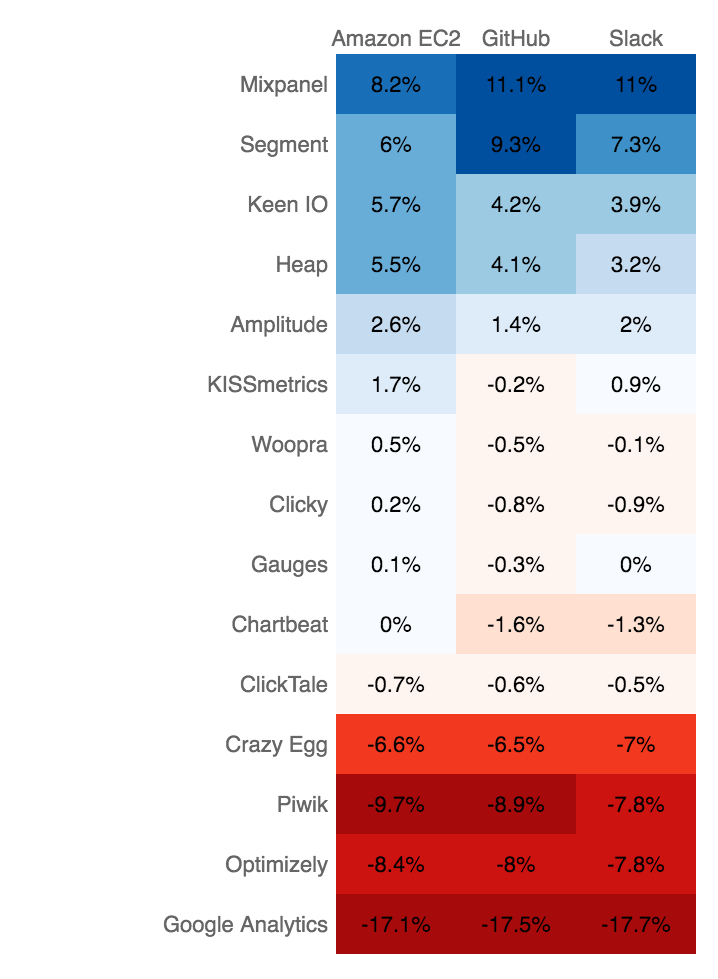 The move away from marketing-focused analytics tools is mirrored by trends in other marketing tools. AdRoll, HubSpot, and Marketo are underused by GECS (MailChimp, however, is extremely popular).

The popularity of support and customer engagement tools among GECS is also notable. Nearly every tool designed to make it easier to talk with customers, from ZenDesk, Intercom, and Help Scout to Olark, UserVoice, and Customer.io, are over-represented among GECS. (Importantly, however, data around this part of the stack should be interpreted cautiously. Engineers—Stackshare's primary audience—adding GitHub to their company's stack on StackShare may not know if their marketing team is using AdRoll.) 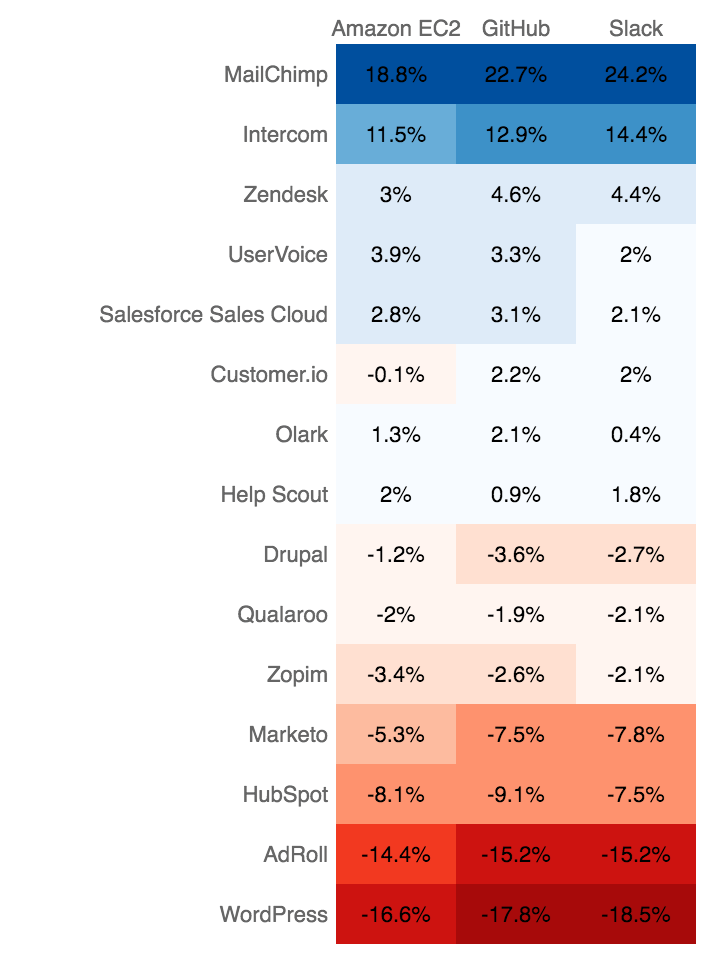 Finally, if we can say anything about GECS' culture based on their software choices, it's that they value collaboration and openness. Nearly every major communication/collaboration tool is over-represented among GECS.

Two other interesting notes also emerge from the chart below: Slack is the most over-represented of all collaboration tools, suggesting that Slack may be the most quintessential GECS tool of all. Second, the one communication tool that's heavily underused is Google Apps, which includes Gmail. Given that other email services like Outlook aren't included on StackShare, this suggests that the rise of collaboration tools correlates with a huge decline in email usage. 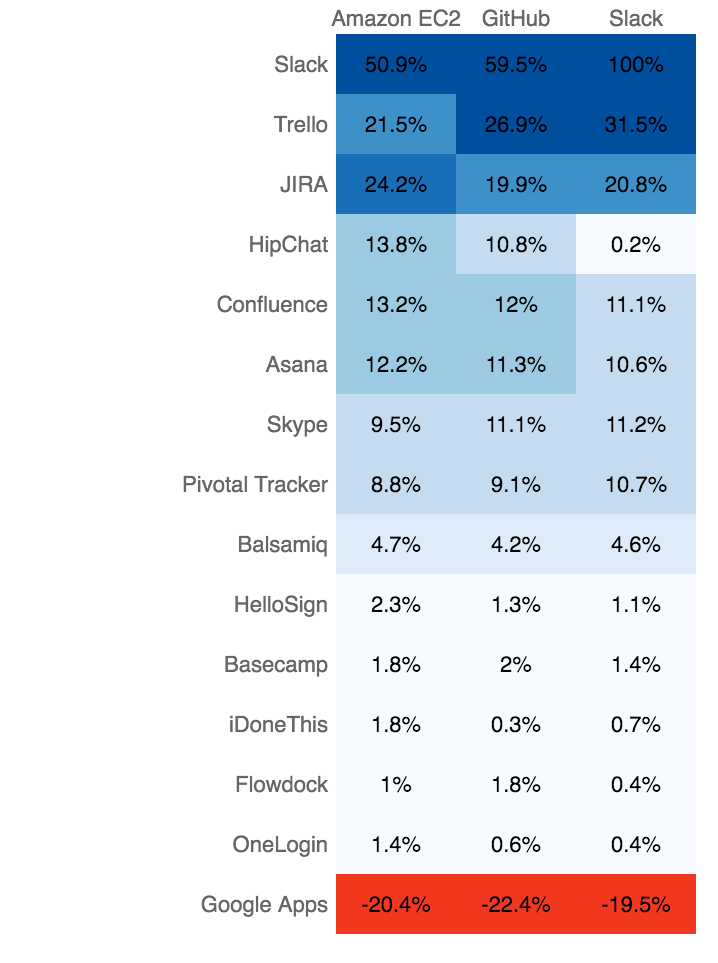 What does all this tell us about GECS?

Put together, these trends paint an interesting picture of GECS. They tend to value power and extensibility, favoring Segment and Amplitude over Google Analytics and powerful front-end frameworks over tools like WordPress. They focus heavily on customer experience and less on marketing and outreach. And—just like the technology ecosystem they're using—they tend to be highly collaborative and connected.

Special thanks to Benn and the whole Mode Analytics team.